We arrived safely back home at around 11:30pm Toronto time Monday the 18th, after 2 stopovers (one in Frankfurt, the other in Washington, DC), and a lot of confusion in the Naples Int’l Airport. Certainly a bad experience with staff, which lead to us both nearly missing our flight, and also damage to our bicycles. But more on that will come with the Naples posting later.

Internet from Rome and south of there had been extremely spotty, and expensive at times (5 euro per hour at a few of our hotels – and still slow by N. American standards), so we haven’t yet posted about our visits from Siena onwards. Besides, making time for blog-writing was difficult, what with all the sights planned.

For the next few days, I will be writing-up the log of the rest of the trip. So, expect Montalcino’s write-up tomorrow, then that of Montepulciano on Friday, followed by posts for Orvieto, Viterbo, Rome, Pompeii, and Napoli and our returning flight in the next week-and-a-bit.

After a GIANT lazy spell, I will (finally!) be posting the rest of the trip, and updating the blog. Stay tuned.

Since we arrived late in Volterra the previous day, we had a quick walk around the town before we packed up and hit the road to Siena.   Starting with a height advantage helped, but the overall trip was still long, and it was a brutally hot day at times.

We stopped for a break at the medieval fort of Monteriggioni halfway along the route to Siena. The road up and through the town gate was so steep that it had ridges created by interleaving the paving stones to give extra traction!

The fort/town is one of Siena’s defensive structures built around the 13th century to protect trade routes against attacks from their rival Florence. In fact, this is where the Dante Alleghieri hid out after he had angered some powerful Florentines with his caricatures of them in his Inferno. It still has all of its tall walls and 13 turrets intact.

Siena is possibly a challenger to Florence, in terms of having impressive structures. Siena has wide streets line with 4, 5 and often times 6 story stone buildings, whereas Florentine streets are smaller and jam-packed with shorter buildings (which rarely surpass 3 stories), and aesthetically are less pleasing.

Conversely, while Florence’s grand cathedral is monstrously sized, the smaller Sienese counterpart is far more refined, with very accurate stonework and an ornate floor – complete with tricolour stone engravings of saints and some scenes from the life of Jesus. One can only imagine the time and resources put into such art work.

Surely one of the highlights of our two days in Siena was the town square, il campo, which is a huge semi-circular piazza with a concave brick centre. We ate dinner in one of the trattoiri of the square on our first night.

In Siena, we were lucky to have our hotel right beside a camping store and a grocery store. We bought a gas cartridge for my camp stove and then some pasta, and made our own dinner the second night. 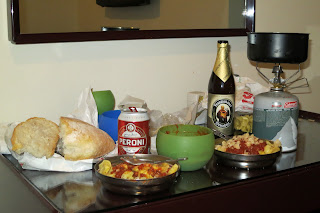 We (*Steve*) accidently bought some bad beer for our dinner aperitives; it had a gross after-taste! If you look carefully at the bottle, the monk seems to be holding his stomach in protest:

Here are some more pics of our stay: 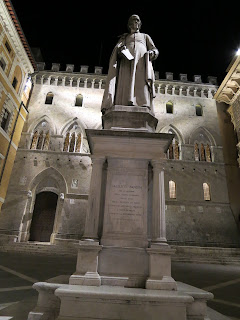 We had a good ride from San Gimignano to Volterra.   We were mentally psyched because we knew the ride up to Volterra itself would be very steep.  We stopped by the Super Mercato located just outside of the walls of San Gimignano and bought some fruit, pane, formaggio and salami just before we left for our ride. This worked out well because there weren’t a lot of little towns between San Gimignano and Volterra.

The first leg of the day was very ejoyable. It was fairly quiet with few cars. We did have the company a lot of little green lizards who were sunning themselves every few meters along the roadside. They would scury under the scrub brush and grass as we approached them. At one point we road along a gravel road with beautiful vistas of colourful Tuscan hills with rich olive groves, vineyards and grain fields.  Small volcano-like mountains jutting out of the hills in the distance; very picturesque.

We learned how to take panoramic photos with the camera of our phone. The quality is not as great as a real camera, but it allows you to better appreciate the scenery:

We stopped for a break and a late lunch in the shade of some cedar trees by a small church at the base of the climb to Volterra. We figured it was good to rest and recharge ourselves with the nourishing lunch we had packed in San Gimignano before starting up the steep arduous climb to Volterra. There was a large parking lot nearby. It seemed to be associated with an old alabaster factory located beside it, but it was rather empty; perhaps it had been busier in better economic times of the past.

The climb up to Volterra took some time as we were moving very slowly. We weaved our way up the serpentine road, pausing every so often to catch our breath and take a drink of water to keep hydrated in the blazing Tuscan sun.  Thank goodness for the constant breeze that was a respite from the heat radiating from the hot pavement below us.

Part way up the climb we encountered some signs indicating that an archeological site was located just off to the side of the road. We took the opportunity to stop and take a break and do a little exploring. There was no one around so we carried our bikes up and off the road and locked them together up against a small fence. We then followed the well-worn dirt path leading to the two archeological sites.

Both sites were ancient hellenistic tombs from the 4th century b.c. They were quiet interesting. There was electric lighting once we entered into the tombs so there was no need for a flashlight. Here are a few pictures:

After the pleasant break we continued our slow but steady upward climb to Volterra. We arrived in town late afternoon and checked in to our hotel, La Locanda. The hotel was very accommodating with our request for a place to store our bikes. They let us store them in a hallway off of the kitchen. We cleaned up and showered and changed into our tourist clothes and then wandered around the town before settling on an outdoor patio in one of town Piazzas for our dinner. We then wandered the streets late into the evening. Had to go back to our hotel to pick up our sweaters since it was actually quite chilly once the sun went down.

The next morning after a quiet breakfast at the hotel, we wandered the town for a few more hours taking in the wonderful panoramic views of the Tuscan hills below us as well as some interesting sites including the local churches, the ancient roman theatre and the archeological park at the peak of the town with it’s Etruscan ruins and Roman cistern.

All in all, a very enjoyable visit and a little less tourist infested than San Gimignano. Volterra also becomes very quiet in the evening once the day crowd and tourist buses depart. Highly recommend staying overnight so that you can enjoy the early morning and late evening solitude.

We are finding it difficult to find time in between cycling, sleeping and seeing sights to update the blog. We made a few mental notes though, to remember what happened where and when, so we can write up the visits to all the towns we have seen once we reach Rome (or possibly Viterbo).

Right now, we are in Orvieto, just preparing to see the town briefly and then check out and cycle to Viterbo.