The planning continues, and now I’ve managed to figure out all the stops, the route and where we will camp on our journey from Florence to Rome, Naples, Pompeii and the Amalfi coast. The aeroplane has been booked – leaving May 31 from Toronto Pearson, to arrive June 1 in Florence. We will be returning almost 3 weeks later, flying out on June 18th with 2 layovers (Frankfurt, Germany, and Washington, D.C.) before we arrive back in Toronto.

The Itinerary in Brief:

Most of the beginning of the jorney is by bicycle, is the far-less-crowded Tuscant leg of the journey. Shortly after Civitavecchia, the only direct-route roads become crowded, fast-traffic Via Regionale (Regional Highways) – not nice for cycling. Therefore, for the rest of the trip, we will be bring our bicycles on the train with us as we travel which adds ~€5.00 to each train ticket), and use them for sight-seeing and local rides in town. The economic and short 30 minute and 1hr Ferrovie Regionale (Regional Train) rides will allow us to see the Bay of Naples, Pompei and the Amalfi Coast without taking a longer trip, and without risking our necks on the hillier/more crowded roadways of south-western Italy.
Update 13/05/13: After one bicycle trip abroad and probably 2500km more, I have not developed any issues with this headset. Nor have I disassembled it for maintenance – the seals have held up and it has been a solid performer through-and-through.

After a little more than 1000km, I thought I’d start doing a follow-up on some components. Full Speed Ahead’s (FSA) The Hammer headset is the first up for review. 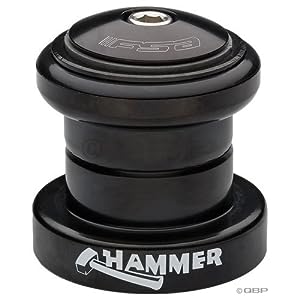 The FSA “The Hammer” headset is a cheap/economical loose-ball headset for threadless systems, and I managed to purchase mine for $16 + ~$2 shipping. Not bad for any headset, especially one billed as “Heavy Duty”.

But how has it fared? Well, when I bought it, the box had opened during shipping, and the bottom bearing seal had fallen out. Disappointing, but no fault of FSA. So, in order to use it right away after installation, I used to top seal on the bottom – not a great seal, but more protection that none at all. Later, the seller sent me a replacement bottom seal after contacting them, and I switched the seals around again.

I installed the headset myself to save on installation fees, so in it went not with a headset press, but with a few whacks from a hammer on a wooden block. Despite this… traumatizing installation experience, it hasn’t shown it to be any worse for the wear.

Despite being a loose ball headset, it has not developed any symptoms of indexing, or rough rolling when spun. Unlike other headsets I’ve owned on other bikes, this one does not exhibit any tendency to ‘prefer’, or index to, the straight-forward position, even after 1000km. Only 200kms ago did I add a front fender, so mud, dust, dirt and water have splashed against the bottom seal without much of an impact. That’s pretty impressive, in my opinion. The top seal, however, isn’t as great, and its design leaves a little to be desired, since it is essentially a plastic cap with little else to stop dust. Rain probably won’t get in, and hasn’t ever posed a problem, but if you plant on leaving this exposed often, it may become a sticking point (literally!).

Supposedly the construction uses oversized ball-bearings in the races, so this may be why it has been so trouble free. The races are full steel, black powder-coated inside and out, so I expected worn-off paint chips to cause grinding in the headset, but this hasn’t been the case either. It continues its smooth performance, even off-road with a lot of stress load. What is noticeable somewhat is the light friction the headset has on road when turning. It may be smooth, but it has a slight grease-like internal resistance for rotation, which is noticeable when comparing more expensive headsets to this one.

Certainly, this headset won’t be as durable as any Chris King would be, but I give it a 4/5 star rating, because of its smoothness and durability. It loses the 1 star because despite smoothness, the headset isn’t the most freely moving, and the design of the top seal means that dirt and contaminants can easily enter.

Got up early this past Saturday morning at the behest of my pal, who reminded me that the Toronto Int’l Bike Show was on this weekend, March 2-4. It’s a place where all of the big names in cycling in Toronto (plus a few other major brands) meet to strut their stuff, and where a few bargains can be found for those so inclined – such as myself. This time it was held in the Better Living Centre of Exhibition Place, as opposed to the Fall “Blowout” show, which is much smaller, and held elsewhere at Exhibition Place.

Here are some shots of the show:

And of course, there are a buncha bikes to drool over. Lots of carbon, whether road or MTB. The bike show seems to cater to “what’s new”, of course, so there were tons of fancy lightweight components on the road bikes, and 29er bikes galore!

Surly Pugsley Alert! Now available with BionX power assist:
Talking with the fellow from the BionX stand there, the BionX/Pugsley combo is his personal set-up, and rocks with about a ~100km range, with a top speed of ~40kmph. Would love to do that offroad!

Lots of more typically-equipped bikes on sale as well; commuters, MTBs, and tourers and especially aluminum road bikes were abundant….

Even managed to score some deals:

My friend bought the tires, a new 26in wheelset, a new derailleur also, and an SRAM 7 speed cassette, for a total of $126.75. My total was about half that, all told, including the $13 admission price.